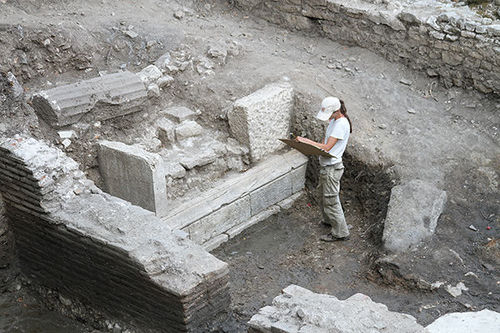 The SE Shrine faces west and occupies the area south of the Basilica. It was situated within a small temenos at the eastern terminus of the forum’s southern portico. The primary door leading into the precinct was 4.2 m wide, allowing for maximum visibility of the central shrine. A small door (0.8 m) also allowed entrance into the temenos from the adjacent road. The shrine occupies almost the entire width of the temenos, which would have served essentially as an open-air porch fronting the shrine.

The extant remains served as the base for a floor and superstructure that no longer survive. Three steps on the southern side of the monument reveal the approach to this floor. A large, fluted Doric column of limestone was found directly above the monument, resting on late-antique deposits. It is likely that this column, for which no other representative examples have been found in the excavation, originally formed part of the shrine’s superstructure.