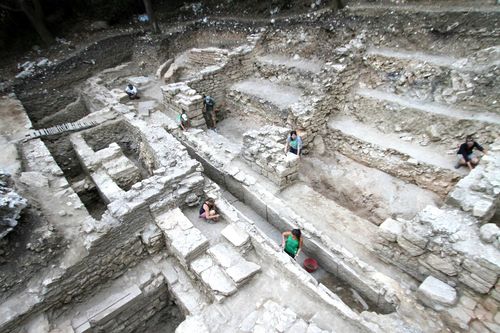 The RFE Project unearthed part of the building located at the northeastern end of the forum. The NE Building shows two major phases of construction dating to the Augustan period and to the rebuilding of the Forum in the early 2nd century AD. The internal walls of the building are decorated with fresco. The surviving fragments of painted plaster, though quite extensive, are too worn to discern any specific information about its colors or schemes. The rear of the building featured a prominent, small room (4.5 m wide). The function of the NE Building remains unknown.

A series of rooms and structures were discovered on a terraced slope behind (north of) the NE Building. Two of the rooms were tabernae (shops), while one was a shrine. The buildings fronted a small road running in an E-W direction. A Roman sewer was discovered beneath the road.

On the eastern side of the building, a flight of stairs lead up to a higher terrace.