The Legend of Aeneas 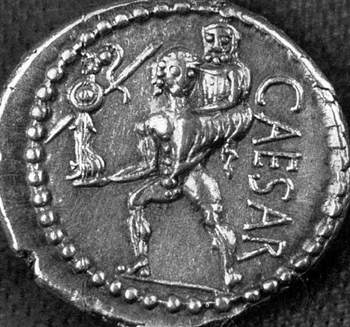 Denarius (silver coin) of Julius Caesar, showing Aeneas carrying Anchises (his father) and the Palladium (sacred statue of Athena) from Troy, 47-46 BC

Since the Renaissance, European intellectuals made the journey to Butrint to see the ruins of the city described in Vergil’s Aeneid (3.292-505) as a small Troy.

According to legend, Aeneas disembarks at Buthrotum, after sailing north from Actium. He encounters Andromache weeping at the cenotaph (empty grave) of her former husband, Hector, who had been killed by Achilles at Troy. Aeneas learns that prince Helenus, son of Priam, founded Buthrotum in Epeiros after escaping the sack of Troy. Aeneas is amazed to see that the city was built to look like a little Troy, with rivers, monuments, and places named after those at Troy.

Julius Caesar traced his ancestry to Aeneas, son of the goddess Venus. The coin minted by Caesar highlights his divine ancestry and his connection to Aeneas, who was the legendary forefather of the Roman people.