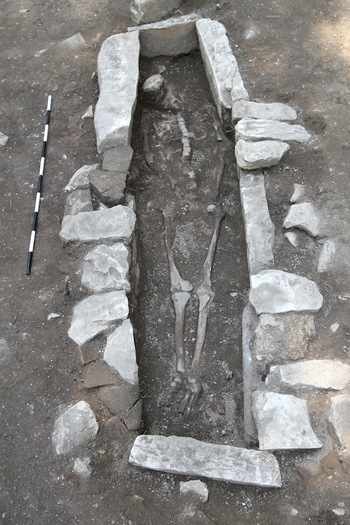 FROM INDIANA (JONES) TO (BUTRINT) ALBANIA

Craning over the exposed burial, I gingerly dusted debris and leaves away from the narrow, contorted bones of a skeleton still half-swaddled in dirt. The soft sweeping noise of my leaf trowel penetrated the silence of that May morning as the sun began to more aggressively filter through the foliage bordering the rich pocket of Albanian land at Butrint where our team had the privilege to excavate. With awe I watched this skeleton, surrounded by fragments of pottery, revel motionlessly as its bones absorbed in the warmth of the sun for the very first time and wondered silently if anyone would experience the sad serenity I felt centuries from now as they swept away the earth encasing my bones.

As an English and Theater double major with an Art History minor, I never believed I would have the opportunity to work at an archaeological site, much less examine firsthand the remains of an over six-century-old skeleton. Trained from a young age to appreciate the Indiana Jones trilogy in complete silence, a mandate issued and enforced by my enthralled older brothers as we huddled within the pool of light exuded from the television screen, I had always assumed that archaeology was an intangible occupation reserved for men in safari caps and fedoras clutching priceless ancient artifacts as they dodged Nazi bullets or slinked through the winding, cursed bowels of Tutankhamen’s grave. Yet, my experience as a trench excavator this past summer working in Butrint Albania, exposed me to a more sacred and visceral form of archaeology glaringly absent from Hollywood films or black and white photographs of wide grins cradling the treasures of ancient Greece, Egypt, and China. 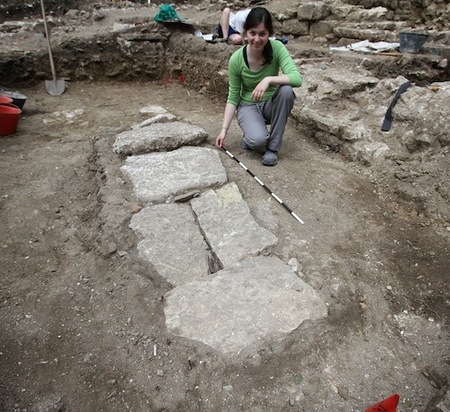 Working as a trench excavator during the summer of 2013, I helped unearth and document key medieval structures, burials, and artifacts which may help reconstruct a more developed view of how the medieval residents at Butrint lived, interacted with each other and other cultures, worked, and even died. Observing firsthand the way in which the forum structures of this rich Roman colony became the literal foundation and figurative backbone for later generations of Albanians who would inhabit the site throughout its period as a Roman colony and later Venetian settlement, I became well-acquainted with and enraptured by archaeology as the connective tissue linking modern civilizations with ancient ones. The excavation at Butrint in particular was a colossal team effort, incorporating local Albanian archaeologists and skilled laborers whose personal understanding of the site and its cultural relevance shaped my own relationship with the site we excavated, and a variety of trained archaeologists, specialists, graduate students, and undergraduate students from Greece, Spain, France, Italy, Belgium, the United Kingdom, Hungary, Canada, and the United States. On any given morning, I would communicate in English, Spanish, or even in broken Albanian as I excavated new context layers with my colleagues. I developed a more global, personal, and professional appreciation for different cultures and languages as I lived and worked with specialized individuals from various nations in the most beautiful and remote country I have ever had the opportunity to visit twice.

Indeed, this past summer was not my first trip to Albania, though it was my first opportunity to excavate in the field. During the summer of 2012, I stepped off the ferry that shuttled me from the island of Corfu, Greece to Saranda, Albania entirely unprepared for the fact that I would fall so in love with the people, culture, and archeological experience I encountered in Ksamil, the tiny town near Butrint where we lived and slept for six weeks, that I would actively seek to return to Albania a second time. During this first summer as the finds manager of the Butrint excavation, I handled, documented, weighed, and at times even helped clean many of the artifacts which emerged from the field still dripping with mud or encrusted with sandy dirt. I organized and photographed the recently unearthed finds to prepare them for their induction into the formal current archaeological record and helped attend to the needs of the specialists as they examined these priceless artifacts. I became an amateur numismatist, admiring the small and intricate ancient coins sporting the profiles of Roman emperors, Venetian vessels, or Christian imagery as they lay in my palm, and I eagerly gleaned all the information I could remember about glazed, painted, and ridged sherds from pottery specialists whose collective knowledge of earthenware spanned from early Greek Archaic to late Medieval ages. Thriving in an atmosphere of study and appreciation for past cultures, I became eager to learn more about the archeological processes of excavation, conservation, and analysis.

When I returned to Albania this past summer to work as a trench excavator, I applied the information I had acquired during the summer of 2012 analyzing and documenting the finds to help hone my skills identifying and extracting artifacts. I became proficient at drawing scaled plans and section drawings of the walls, steps, and burials we excavated, and on a daily basis I flexed my rusty linguistic muscles communicating with the patient Spanish archaeologists who worked with me both near and in our trench. I also became increasingly grateful to the Albanian local workers who helped develop my rudimentary understanding of their language, teaching me many of the numbers, the days of the week, greetings, and the names of archeological terms and tools. This ability to work in a foreign country with a variety of individuals who speak a range of languages provided me with an immersive educational experience which I had not experienced during my years of study in the United States or even during my semester abroad in London. I became independent and intuitive, reading the body language of my peers as we worked tirelessly to learn each other’s languages. By the time I returned to America after the six-week excavation, I had invested in audio lessons geared towards those individuals who wish to become proficient in the Albanian language. My mother laughed, gently teasing me for expressing an insatiable desire to learn a language spoken by only a relatively small number of people on the planet, but I continued to sound out Albanian words in an effort to expand my vocabulary and bolster my hope of returning yet again to Albania to continue my education in Albanian culture, language, and archaeology.

As I continue my final year as an undergraduate at Notre Dame, my future remains uncertain. Though I hope to potentially pursue a career in writing, I also often hope that I may apply directly the information I acquired regarding archaeological research and documentation to my daily life and that I may use the experiences I had in Albania to serve as inspiration for the future short stories and plays that I write. My past two summers have irrevocably changed my worldview and has served as a key, irreplaceable element of my education as an undergraduate here at Notre Dame. I cannot converse in Spanish without thinking of the archeological terms and slang which I learned from my archeologist friends just as I cannot watch a sunset without remembering the way the sun used to melt into the waves of the Ionian as I watched the view from the rooftop of our collective home. I cannot practice Albanian without remembering the people the town in which I lived who taught me my first Albanian words, and I cannot look at the bones in my hands shift beneath my skin as I type without remembering the fingers of that first skeleton I excavated on a May morning in Butrint during the summer of 2013. The skills which I learned as a budding archaeologist and linguist in Albania these past two summers have helped change my understanding of my own culture and language and those of many of the fascinating individuals whom I have encountered. I became enamored with a language that I never knew existed when I began matriculating at Notre Dame, and I became acquainted with Albanian music, culture, and society on a level so personal that it has inspired me to continue learning the Albanian language even now that I have returned to Indiana. I hope one day to return to the country and perhaps help document the stories of the local workers, store owners, and neighbors whose kindness and patience helped me to feel at home in a foreign country as I explored a profession that captivated me and which I never thought I would have the opportunity to explore in this life.

This is thus the story of how I briefly became an authentic modern Indiana Jones and, more importantly, a life-long appreciator of the Albanian language and culture. I am forever grateful for the experiences I had serving as the finds manager of the Butrint excavation in 2012 and a field excavator in 2013 and for the relationships I fostered with other students and archeologists, and I hope that it will not be long before I am able to return to the country and the cultural and archaeological site of Butrint again.